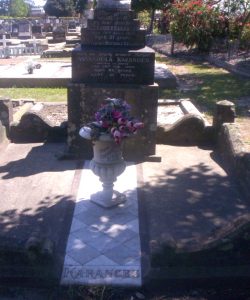 Arrived in Australia in 1923

Prior to the funeral of the late Mr. Alexander Karanges moving from Newcastle Cathedral on Thursday, service was conducted by the Most Rev. Archbishop Knetes, of the Greek Orthodox Church of Australia. The representative congregation included most of the entire Greek citizens of Newcastle. The deceased who was 2t years of age had been at the Blue Mountains for a change, which was however, unavailing, and his death occurred suddenly. Deceased, who was a native of Greece, had been in Australia three years, and was much esteemed by all who knew him. The surviving members of the family are his mother, five brothers and seven sisters, who are residents of Greece excepting Mr. Michael Karanges, managing director of the Niagara, Limited, Newcastle and who was the chief mourner. The internment was made in the Church of England cemetery, and wreaths were placed on tile grave on behalf of loving brother, Cousin Alex, Vera and employees Niagara. Lewis and Philip, N. Scott, W. H. Corrigan, Horace and May, Mr. and Mrs. Chapman, Mr. and Mrs. T. Curley, Grivas Bros. Mr. and Mrs. Loutides, Meletios Bros., R. Oranides, Payzis Bros.. P. and A. Scott, J. L. Perrett, Mr. and Mrs. O. Loughlin, Mr. and Mrs. Spring, Zervos Bros., S. Larindas,