Dearly loved wife of Spiro (deceased-d.17/12/1983); mother of Stacey, Peter and Kathy; mother-in-law of Brian and Grant; Yiayia of Laila (and partner Josh), Leylian (and partner Owen), Stuart (and wife Tania), and Yvette.
The Funeral Service will be held at St Spyridon Greek Orthodox Church, Gardeners Rd, Kingsford, on Wednesday 1 October at 10.30am followed by burial at Eastern Suburbs Cemetery, Military Rd, Matraville.

Spiro married Angela who was from Sydney, by proxy in 1946. They had met there during the war when Spiro called into Sydney. They lived for quite a few years in Lake Street. They later moved to Sydney when Kathy was a few months old. Spiro took them over, then returned to Perth and stayed in Cottesloe, whilst he sold his business. Spiro and Angela had their first child, Stacey, followed by Peter two years later. The same year Kathy was born the family moved across to Sydney. The couple received their certificate of naturalization on the 20th March 1959 (Commonwealth of Australia Gazette (National : 1901 – 1973) |
Thu 30 Jul 1959 [Issue No.47]  |  Page 2657  |  CERTIFICATES OF NATURALIZATION. 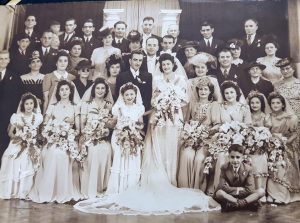 Bride: Angela Theodore from Sydney and her husband was Spero Karasavas from Perth