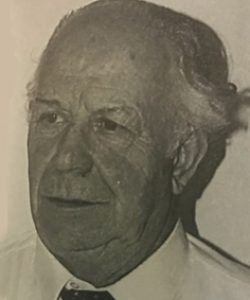 Arthur operated cafes in Barellan and Narrandera until moving to Rose Bay in 1966.

By 1944, Angelo Roufogalis had been operating the Barellan cafe and adjacent Royal Theatre since the late 1920s. Nephew, Arthur Roufogalis, arrived from Greece in 1938 and proved his worth. He took over the running of the businesses in 1944 to allow Angelo to help Nicholas Laurantus for about six months by running his Rio Theatre at Lockhart. Later that year, Angelo sold his Barellan business interests to Arthur and moved to Canberra. where he went into a cafe business with his brother-in-law. Arthur sold the Barellan cinema business in 1948, then the cafe in 1950. With that, he moved to Narrandera and out of cinemas. (extract from Overview of the Cinema Years, Chapter 4 of KEVIN CORK’s Ph.D Thesis | Kythera-family.net

He married Christina from Valcovina Akrata, and they were blessed with two daughters: Margarita and Dimitra.

Arthur sadly passed away on the 4th December 2005.