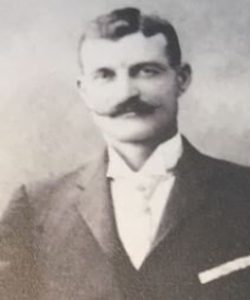 After migrating to Western Australia

he was known as Arthur Auguste (and also as Peter Angelo).

In 1903 he returned to Port Said to marry Panaula Cominou,

the daughter of Anastasios and Maria Komninos,

and brought her to Perth in the same year.

and did so much for the chain migration of Castellorizians to Perth.

Mr. Athanases Auguste, president of the Castellorizian Association of Western Australia, and one of the founders of the Greek community in Perth, died at his residence in Pier-street, on Thursday at the age of 62 years. Several of his country men said yesterday that Mr. Auguste, who arrived in Perth in 1890, was the first Greek to come to this State. ‘A true patriot,’ was their comment when referring to him. In his younger days Mr. Auguste led an active and adventurous life. He was born in the small island of Castellorizo, the most southern of the Aegean Islands, which Byron commemorated in his verse. Mr. Auguste was born on January 14, 1870, the island being then under Turkish rule. Clashes between Greeks and the Turkish authorities were frequent, and in his youth Mr. Auguste took part in a miniature naval battle between a Greek sailing vessel, and a Turkish patrol boat. The engagement occurred off the island of Castellorizo; and with Mr. Auguste in the sailing vessel were his cousins the Manolas brothers, who later migrated to this State, and who died here some, years ago. Sailing vessels at the time carried arms and the Turkish patrol boat was driven away. One member of the crew of the little sailing vessel was wounded, and. at the risk of their lives the other members of the crew took him back to the island. Young Auguste took the wounded man ashore and communicated with his relatives. Meanwhile the Turkish authorities on the island had heard of the engagement. They knew of Auguste’s return to Castellorizo, and they endeavoured to capture him. The houses on the island were close together, and. Auguste eluded his pursuers by jumping from one roof to another. He took refuge on another vessel, and later joined the Manolas brothers in Egypt. They secured employment with the authority controlling the Suez Canal. In the course of his employment, young Auguste observed the vessels passing through the canal, and inquired where some of them were bound. He was told that they were going to Australia. He determined to visit Australia himself. He worked his passage to Singapore, and later he boarded another steamer at that port, and proceeded to Broome. For some time he worked at the pearling grounds, and then he came to Perth. After a brief stay he went to South Australia. The Manolas brothers were still in Egypt and at Mr. .Auguste’s request they joined him in Adelaide. For some years they conducted a business in Adelaide, and then returned to Perth. Mr. Auguste is not only believed to be the first Greek to settle in Western Australia, but his countrymen consider that he must have been one of the first Greeks to come to Australia. Among Greeks in Perth, it is stated that the first Greek to come to Australia passed through Perth, and later went to New Guinea, where he was reported to have become a tribal chief. “Mr. Auguste was practically the founder of the Greek community in Perth,” said Mr. L. Mandalis, secretary of the Castellorizian Association, yesterday. “The majority of the Greeks in Perth came from the island of Castelloriso. When many of them arrived at Fremantle they were in straitened circumstances, but Mr. Auguste was always disposed to help them. He provided them with food and shelter until they obtained work. To a great extent he was responsible for the erection of the Greek Hall in Francis-street, and the establishment of the Greek school in that building. The Castellorizian Association was formed in Perth in 1913, and with its funds the land was bought on which the hall was erected. Mr. Auguste was the Crst president of the association, and with a break of one or two years, he was president up to the time of his death.”For many years Mr. Auguste was well-known in Perth as an oyster and fish merchant. He is survived by a widow, six daughters and three sons. At 3 p.m. yesterday, a service was conducted in the Greek Hall in Francis-street by the pastor of the Greek Orthodox Church. The remains were interred in the Greek portion of the Karrakatta Cemetery where the Rev. C. Manessis conducted the service at the graveside. The pall-bearers were :— Messrs. H. P. Downing, K.C., the Greek Consul for Western Australia; L. B. Bolton, M.L.C.; A. Phocas and N. Papastatis, past president and vice-president respectively of the Greek community; Doscas; K. Sillelidis; M. Michelides; and Kalaf.

AUGUSTE. — The Friends of the late Athanases Auguste, late of 218 Pier-street, Perth, dearly beloved husband of Panaula Auguste, are respectfully informed that his remains will be interred in the Greek Cemetery, Karrakatta, at 4 o’clock THIS (Friday) AFTERNOON. The Funeral is appointed to leave his late residence, 218 Pier-street, Perth, at 2.45 o’clock, proceeding to the Greek Church, Parker-street, Perth, where a service will be held commencing at 3 o’clock. Friends wishing to attend the Funeral may proceed by the 3.45 o’clock train leaving Perth.

AUGUSTE. — Members of the above Community are respectfully requested to attend the Funeral of our late Foundation Member, Athanases Auguste, which will arrive at the Greek Cemetery, Karrakatta, at 4 o’clock THIS (Friday) AFTERNOON, after a service at the Greek Church, Parker-street, Perth, commencing at 3 o’clock. Members wishing to attend may proceed by the 3:45 o’clock train leaving Perth.

HELENIC ASSOCIATION OF W.A. INCORP. AUGUSTE. — Members of the above Association are respectfully requested to attend the Funeral of our late fellow-member, Athanases Auguste, which will arrive at the Greek Cemetery, Karrakatta, at 4 o’clock THIS (Friday) AFTERNOON, after a service at the Greek Church, Parker-street, Perth, commencing at 3 o’clock. Members wishing to attend may proceed by the 3.45 o’clock train leaving Perth.

AUGUSTE. — Members of the above Association are respectfully requested to attend the Funeral of our late President and Foundation Member, Athanases Auguste, which will arrive at the Greek Cemetery, Karrakatta, at 4 o’clock THIS (Friday) AFTERNOON, after a service at the Greek Church, Parker-street, Perth, commencing at 3 o’clock. Members wishing to attend may proceed by the 3.45 o’clock train leaving Perth.