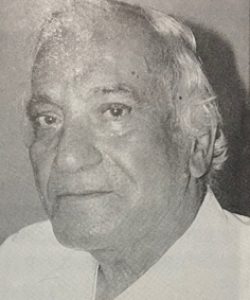 For Greek-Cypriot Vasilis (Bill) Spanos, 86, who died in Sydney on February 27, Australia was a new, beloved country. So much so, that during a visit to his old homeland in 1949, he organised the first airlift from Cyprus of hopeful migrants so that they might share in his good fortune.

At $140 each, 28 people packed the charter. They hadn’t been promised a pleasant trip and they didn’t get one. Maximum speed was 200 k/mh and refueling was frequent; a week later they got to Sydney.

Those who knew Spanos knew they’d make it. He had such a reputation for getting thing done that he was known around Sydney as The Unbelievable Greek.

Spanos was born in Kythrea, Cyprus, on New Year’s Day, 1911, one of five children of Antonios and Effrossini Spanos. His father died when Vasilis was six months old.

In Cyprus, Vasilis trained as a carpenter, but at the age of 17 migrated to Australia to join a brother, Andrea. On arrival he was immediately taken to Andrea Aristide’s kafeneio, which he was always to remember fondly as “head office” for Cypriots in Sydney. He was to progress through the ownership of numerous city cafes and butcher shops to become controller of a major meat exporting business.

The young Spanos was a man of many jobs. He washed dishes, took over what he called a “grill room” in William Street with his brother, and followed this as proprietor of George Street and Circular Quay cafes. He left Sydney to cut cane in Queensland and to save for an intended trip to Cyprus. Instead he went into business in another Oxford Street cafe.

After wartime work on the wharves, Spanos helped to expand the total of Sydney’s cafes. With fellow Cypriot Mick Saliaris, he bought the Station Cafe in Elizabeth Street, as well as the Mayflower, Quay, Lewis and Arizona Cafes. In 1946 when he felt he was financially secure, he married Sophia Pitskas, from Castellorizo. He had first met Sophia at the Cypriot Ball in Paddington when he declared she was “more beautiful than Cleopatra”.

Spanos made no secret of his ambitions. “I wanted to associate with the “big boys and be more successful than they were”, he said. So he set about establishing a US-style butcher shop in Georg Street. Other shops -one in Oxford street and another in Maroubra- followed. In 1956, after filling an American order of meat for the Waldorf Hotel, he devoted himself to the export trade in large premises in Alexandria.

From an initial order of $250,000, Spanos’ business went on to turn over up to $35 million a year. As a friend said: “Listening to Bill Spanos narrating a condensed version of his life was like reliving an amazing adventure. He was a man who refused to accept just what life decided to offer”.

He is survived by his wife, two sons, Anthony and Richard, and three daughters, Frosini, Carolyn and Maria.