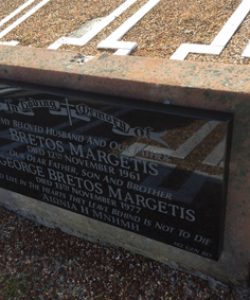 TO LIVE IN THE HEARTS WE LEAVE BEHIND, IS NOT TO DIE.

to George and Vasilia (nee Galanis).

He went to the village school with his brothers and sisters (Dimitri, Minas,  Maria, Panayiotitsa, Evangelia) and was a keen student.

He stayed with an Uncle (name unknown) and went to school, and learnt English quickly by reading the local newspapers and having a dictionary beside him to look up words he didn’t understand. He was a good student and did well,even with language difficulties. When he left school he helped his Uncle in his business and managed to save money to send home to his family in Kythera. He continued saving as much as he could and by the time he was nine he had his first restaurant.

He was married in 1925 at the Agia Triatha Church Bourke St Sydney, to Theodora Lianos.

He developed a love for music, especially Opera, and took singing lessons with a Mrs Cresswell who taught him many songs from operas, but his favourite was La Donna Mobile which he sang with great gusto at friends parties. Through this interest he met Theodora Lianos who was also a music lover, and had learnt to play the piano quite well, and soon there were wedding bells in the air and they married at the Agia Triatha in Surry Hills.

Bretos was one of the eight Founding Fathers of the Kytherian Brotherhood of Australia (now called the Kytherian Association), in 1922. He did not serve in the second administration (1924-1926), but in the third administration, (1926-1928), he took on the executive role of Secretary.

Read More about the life of Bretos Margetis submitted in the kythera-family.net website by Vasilia Uhrweiss (nee Margetis)

Mr Vretos G. Margetis, who hails from Kythera, is extremely young, but capable and full of drive. He is today owner and manager of two splendid and profitable shops standing in the most central locations in the great city of Sydney. These shops afford work to many fellow Greeks. Mr Margetis came to Australia in 1903 and, after working hard for a few years, bought the first of his shops. The second he bought shortly afterwards, in partnership with his brother, Minas. As his commercial career has developed, Mr Margetis has indeed been revealed as a young man of worth. Thanks to his polite behaviour, he has always earned the goodwill of those who have come to know him personally. (From the book Life in Australia, page 201).