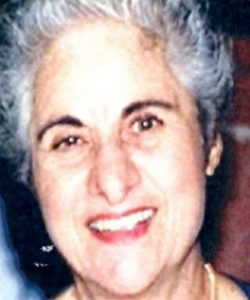 on the island of Kythera, Greece

and after a short honeymoon in Italy,

they came to Australia and settled in Ipswich.

George and Demetra were blessed with

A private funeral service for Demetra will be held at the Greek Orthodox Church of St George, 33 Edmondstone Street, South Brisbane on Monday 20 July 2020. Respectfully attendance is by invitation only from Demetra’s family.

In lieu of flowers a donation to the Greek Orthodox Community of St George School Building fund is appreciated.

This Eulogy to Demetra Kallinicos is dedicated to her by her loving family.

Demetra was born on the 6th October, 1930 in the village of Fatsathika, on the Island of Kythera in Greece. She was the youngest of 5 children to the proud parents of Emanuel and Stamatina Bratsalis. Her siblings were Kyrani, Pashalia, Marika and Andrew. Her first cousin Aleco Amarandos came to live with her family following the death of both his parents in.Her grandmother Pashalia also lived with them. In other words it was quite a full household. Our mother used to share a bed with her grandmother. Tragedy struck the family with the death of Andrew who died of leukaemia at approximately 12 years of age. Her parents were devastated, as were all the sisters given that Andrew was the only son. She always spoke very fondly about him. Indeed she wanted to name a child in his honour.

The 1930s was a tumultuous time for the entire world but for our mother they were difficult but happy years until the outset of World War II when, in her words, the war spoilt everything. She rarely spoke of the war except to talk about the fear that she and her sisters felt hearing the German soldiers marching past their bedroom windows in the dead of night. Having four teenage girls would have been as frightening an experience for the parents as it was for the girls. Nevertheless, they all survived.

Scholastically, Demetra was very gifted. Even though her parents saw no value in education, her father’s brother Theodoro, who had migrated to America, thought differently and paid for mum to attend high school. She completed her studies to year 12 with excellent results. Sadly her dream of becoming a teacher was never realised. Her school years were her happiest years and from the photos that we have we can see that she was involved in all facets of school life including dance and theatre. The one thing she never forgot was the daily trek from Fatsathika to Hora in shoes that didn’t fit and in all sorts of weather. The tracks were so difficult to navigate that even the goats had trouble.

In 1951 she was introduced to a young man. His name was George Kallinicos. The proxenia was arranged by her God Father, Jim Masselos, who happened to be our father’s first cousin. Dad had migrated to Australia in 1935 and returned to Greece to meet mum. We doubt very much that he had any second thoughts about marrying the most beautiful girl on the island. Her beauty was legendary and to this very day the islanders often tell us how beautiful she was.

What may not have been as obvious to our father was her level of intelligence which proved to be the making of both of them as a couple and us as her children. Our parents married in Kythera on the 30th September, 1951 and after a short honeymoon in Italy, they came to Australia and settled in Ipswich.

Demetra was thrust into the reality of being the wife of a Greek migrant running a cafe which included working in the cafe, housing a dozen workers and having children at the same time. Her first born was Mina, who came on the 20th October, 1952 closely followed by Emanuel born 7th January, 1954 and finally John born 12th June, 1960. In 1964 our cousin Peter Cassimatis immigrated to Australia and lived with us for many years. After each of us married and left home, Peter was still there and spent many years living with our mother, in particular during her final years, where Peter also assisted in her care at PM Village. We are very grateful to Peter who we look to as a brother and who has been like a son to our mother and always respected her as a mother. He has always and continues to do what ever he can for all of us.

Sadly for our parents, children marry and move on but the house enjoyed a second lease on life with the arrival of the grand children who would regularly stay overnight with yiayia and pappou. These sleepovers were made up of fun, games, dance, paid employment at the rate of $ 5per Greek lesson, putting up Christmas trees, dressing up in national Greek costumes, overloading of motor vehicles to go to Spotless and spend their hard earned cash and who knows what else. Importantly, the cousins were able to learn to love one another and a strong bond was created that exists to this very day.

When our mother was no longer able to live independently, it was her wish that her house be sold and the proceeds shared amongst her 7 grandchildren to help them buy their own homes. With her blessing this goal became a reality a few years ago and the grandchildren have spent the money wisely. She turned one house into seven. The icing on the cake is that the house remained in the family with one of the grandchildren buying the property. Once again we witnessed the wisdom and generosity of a great person.

Demetra’s final years were challenging to say the least. She was never a person to sit around idly doing nothing but after having one too many falls, in particular a serious fall during a visit to Kythera, in what was to be her final visit to her beloved island, she was forced into care. Initially before she could return to Australia she spent 6 weeks in the Potamos Nursing Home on the island of Kythera. They cared for her in her hour of need, for which we are eternally grateful. During this time in the Potamos Nursing Home her sister Marika was also residing there. Marika was mum’s favourite sister and closest in age. If there was anything good that came out of this horrible accident it was the fact that the sisters were able to spend 6 weeks together, 24 hours a day, to catch up after a life time of separation. Upon her return to Australia she resided at the Kytherian Nursing Home of Panaghia Myrtidiotissa otherwise known as PM Village. She always said to us that if she had to go into care she wanted to go to PM Village because she liked the gardens and the village atmosphere. On many an occasion she would say how grateful she was to the Kytherians for building such a wonderful facility. She was always very complimentary of the care that was provided by the staff of PM Village and once more we can only express our sincere gratitude to them for taking care of our mother.

Demetra was a giver and never a taker. She gave her time freely and with an open heart. Our parents have helped many people in their lives but never with the expectation of anything in return. As the children of such parents, you could never hope for better role models.

Our mother’s legacy is her family, her three sons and their respective families. She had seven grandchildren, five of whom are married, and eight great grandchildren. During her final hours we all managed to come to her given very little notice of what was about to happen. What we saw and experienced in that room during the final hours of her life was love and respect for one another and most importantly the love and respect we all shared for her.

The only thing our mother ever asked of us was for love and harmony within the family and to this day we have endeavoured to grant her that wish and we can only strive to continue to honour her by continuing to grant her this simple wish.

Our mother was a true Christian, who believed in and practiced Christianity. As we bid her farewell on her journey to Paradise may we take time to honour her by reflecting on our own lives and endeavour to live our lives by striving to fulfil as many Christian values as we can.

Dearest mother, may God bless you and keep you safe, in the company of your husband George, to whom you were married for 51 years and your beloved family who have passed.

You were our first love and carer.

Until we meet again.

Your indebted and respectful family