On Sunday 28th October 1934, in The Sun there was an article on page 7 titled Greek Residents to be Honored.

The Greek Community in Sydney will honor two of its oldest members and leaders Mr and Mrs Demetrios Lalas at a birthday dinner at Sargent’s, Market Street, on Tuesday next. Mr. Lalas was born in Messimbria, Eastern Thrace, in 1854, and came to Australia in 1906, after having fought in the Cretan revolution (1890), the Russo-Turkish war (1877), and the Russo – Japanese war (1904). He is one of the principal benefactors of the Greek community here in educational, religious, and benevolent matters, and is a director of the “Hellenic Herald,” the Greek-Australian newspaper.

DANCES AT 80 |TOUGH GREEK FOUGHT
IN FOUR WARS
Mr. Demetrios Lalas, Sydney’s oldest Greek resident, did not even get
winded last night blowing out 80 candles, when the executive council
of the Greek community in Sydney  gave a birthday party in his honor.
Mr. Lalas fought in four wars. He was too busy fighting to get married
until he was 65.
Last night he danced as briskly asanyone. Each day he-walks into the
city from Kepslngton and backagain.
His mother lived to 112. He isaiming at 110.

On Thursday 1 November 1934, The Sydney Morning Herald had an article on page 7 titled: Greek Octogenarian honoured.

Mr. Demetrios Lalas who is said to be the oldest Greek resident of Sydney, was the guest of honour at a birthday party at Sargent’s, Market-street, tendered by the Greek community to commemorate his 80th birthday.
Born in Messimbria, Eastern Thrace Mr. Lalas served with the Russian army against the Turks in 1877, took part in the Cretanrevolt against the Turks in 1890, fought in the Greco-Turki3h war of 1890, and finallywith the Russians in the Russo-Japanese war. He became a prisoner of war at Port Arthur. Later, he went to Colombo, and, in 1906, toWestern Australia. He engaged in business in Perth, and prospered. Later, he came to Sydney. He is a director of the “Hellenic Herald.” Mr. Lalas has been a generous supporter ofeducational and religious institutions of theGreek community.

In the book Greeks in Australia, in page 157

In Sydney in November 1926, Ioannis Stilsos and Georgios Marsellos circulated an eight-page weekly newspaper entitled Panellinios Keryx (Panhellenic Herald). It aimed to disseminate community ideology. In 1931, Demetrios Lalas and Alexandros Grivas bought it and adopted a more flexible approach. This paper stubbornly supported the Greek Orthodox Community of Sydney as an institution, proposed the establishment of a federation of Communities so that the power of the Church would be harnessed, introduced the idea of an all-Communities Council, and guided the leadership of the Sydney Community.

Details as per his application for naturalization:

I Demetrius Theodore Lalas of 757 George Street Sydney , confectioner, hereby apply for a certificate of Naturalization under the Naturalization Act 1903. I am by birth a Greek subject. I was born on the 26th day of October in the year 1853 at Messembria in the Macedonia in the Country of Greece. I arrived in Australia from Egypt on the 20th day of September in the year 1900 per the (?) and disembarked at the port of Freemantle. Since my arrival in Australia I have resided in Perth and in Sydney for the last 8 years. I am single. I have no children.

Details from interviewer in regards to application:

In his statutory declaration Mr Demetrius T. Lalas alleges that he was born at Messembria, Macedonia, Greece.

Demetrius (Demitrius) Theodore Lalas, 62 years old, single, occupation confectioner, has resided in the Commonwealth for about 15 years and arrived in Freemantle, West Australia, direct from Greece. Shortly after arrival he started in business for himself at Perth as a confectioner and remained there for four years, he then went to Bolombo for about eighteen months, he then came from there direct to Sydney and kept an oyster salon in William Street for four months, he then went to Mudgee for six months where he also kept an oyster saloon, he then returned to Sydney and went into business as a confectioner at 120 Market Street, for about eighteen months and then returned to his present address where he is still in business as a confectioner. 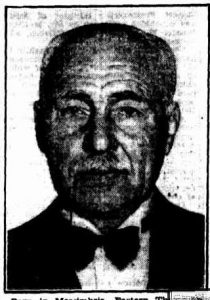