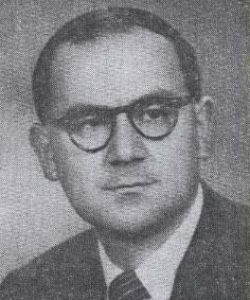 was born in Washington DC

He arrived as a 2 year old with his older brother john,

his younger brother Paraskevas and their mother.

Sponsored by his father, a person he had never known,

without personal funds, with uncertain prospects and no proficiency in English.

working in Rozelle and North Sydney in a milk bar and a pie shop.

He eventually began work as a linotype operator in 1946.

He first worked at the Vema and then joined the Hellenic Herald then under its founder Alex Grivas, propelled into the editor’s chair. He became the managing editor of the Hellenic Herald, as it was then known. Under Jim’s leadership the newspaper, already a respected voice of the Sydney Greek Community, rose in circulation to be the largest Greek newspaper outside of Greece. His personal struggles enabled him to develop deep sympathies with others in similar circumstances and he saw the newspaper as a powerful voice for his political and social commitments.

He married Loula Georgiadis in 1949 whilst still struggling at the bottom rung of the newspaper publishing business.

In 1998 Jim was included in the Queen’s Honour Roll.

His achievements were therein recorded as follows:

Always a champion for the migrant voice, he was instrumental in the conception and evolution of the concept of multiculturalism and in the advancement and interested of ethnic groups.

He took particular pleasure, along with prominent members of Australia’s literacy and arts community, in forming the citizens for Democracy group, a precursor in the mid 70’s to be republican movement.

He was appointed Australia’s first male civil marriage celebrant – a role he undertook with great gusto.

Being an ideas man, he continued to dream of further community involvements but the onset of Parkinson’s disease at the age of 60 made these increasingly difficult to realise.

An exemplary speech in Greek was delivered on 23-12-78 by Dimitrios Kalomiris, at the annual dance and the 80th anniversary of the Greek Community of New South Wales in Sydney, in honor of the Philhellene Prime Minister of Australia Mr. Goff Whitlam.

This is a Hellenic apotheosis for the architect of a new ethnic epoch in the Antipodes. History has no parallel paradigm of an Australian politician with your scholastic dynamism, energy and ethos whose ideological horizons panicked the aristocrats and autocrats of this polyglot Ethnos.

You are the protagonist of the metamorphosis to polyethnicity, the polemarch of catastrophic xenophobia and the cathartic catapult of anoetic ideas.

The Whitlam cosmogony was the catalysis of comic phobias from antidemocratic and diabolic dipsomaniacs of diaeresis and dichotomy. The decades of Whitlam dramatized in a dithyrambic method the logic of anamorphosis, against lethargy, apathy and an anopheles monarchical system.

This laconic panegyric and eulogy is no rhetoric of phrases, but an exegesis of our agape for you-with your homeletic Achilles Pterna (heel)!

For a myriad of Hellenes in Australia you are the symbol of enthusiasm- as you are anathema to the tyrants!

This οctogenarian Hellenic Organization in harmonious synergy with you for decades, is skeptical and critical of the labyrinth and the stasis in the economy and splenetic mythology from the plutocrats and eupatrid oligarchs.

It is axiomatic that the threnody of the plutocrats in criticizing Whitlam, was a deleterious hypocrisy to dethrone you by hysteria and a plethora of chimerical and acarpous aerology.

The last triennial haw made endemic the phenomenon of chaotic economy and peripeteia, practiced by the peripatetic apologists and Canberra hierophants.

These sophists and teratologists want an hypertrophic Lernea Hydra for Mammon and draconic austerity for the Demos.

This antithesis, this antimony, this cynicism of the Canberra Cyclops, is characteristic of an anaesthesia and autarchic ataxia for the Hellenes in Diaspora.

Your exodus from politics is a cardiac oedema for this ecclesia. No political acrobat or alchemist can bring amaurosis to Whitlam. We, the biotic dialectical empiricists, say paeans for your Academic bibliolatry, but you are our political Archon for catharsis in the Augean Stables, for a Herculean anamorphosis and the anthropic Pharos as characterized by the epigrammatic aphorism:» not only to live but to live well».

From this Symposium, Kyrie Whitlam, an ironical 1979».