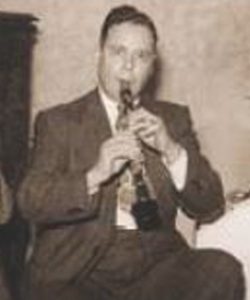 was born in Kythera.

Manoli and Polyxeni were blessed

with two daughters: Mary and Eleni.

Manoli migrated to Australia in 1939.

His wife and daughters joined him in 1949.

Paul Gianniotis shared his memories about the Malanos family through an article published in 2005 in Kythera Summer Edition, titled “The Malanos Letters – family postcards are finally reunited”

No. 1 Darlinghurst Road, Kings Cross in Sydney had been etched in my memory since the early 1940’s. At this address, my first cousin George Yanniotis and Manoli (Leousaki) Malanos were business partners, running a very successful fruit and vegetable shop and milk bar. Leousaki (this was his paratsoukli) had previously lived in Hora, Kythera with his wife Polixeni and two young daughters, Mary and Eleni who were born in 1932 and 1934 respectively. Leousaki had decided to emigrate to Australia about 1939 for better opportunities and at a later date to bring his wife and family to join him and yes you guessed it, the Second World War had intervened. It was some years later before the family would be reunited in Sydney. In the meantime, No.1 Darlinghurst Road continued to be a good meeting point for many Greeks hoping for a free milk shake and chit chat. My widowed mother Diamanta who was from Kato Livadi would take me there on many occasions for a family get together and to drink some metrio cafe and to play that popular Greek card game ‘Pastra’. My eldest brother George would also come along to learn to play the clarinet from his tutor Leousaki. The bond among both partners cousin George and Leousaki and our family was very strong. A quartet was formed to attend Greek Weddings and other special occasions with Leousaki and my brother George on clarinet and Manoli Mazarakis on violin and my other brother John on guitar. Quite an ensemble and it was free! The true meaning of the Kytherian Brotherhood had come to the fore … everyone helping each other. Back in Greece, many families were enduring hardships during the German occupation of WWII and, finally at the end of the war, the mail service between Greece and Australia was re-opened. Letters started to filter through and all the mail had to be censored. At the age of about 10, I had a great interest in collecting stamps as young kids did at that age. I had asked Leousaki to save all the Greek stamps for me and one day he gave me a whole stack of envelopes which he had put into an old Cadbury Gold chocolate box. The stamps were still on the envelopes! As the War ended, more mail was coming through and Leousaki was relieved to learn that his wife Polixeni and his two daughters were in good health despite many hardships. It would only be a matter of time that they would be reunited, but it wasn’t until 1949 that they flew into Mascot Airport. It was a very joyous and emotional reunion, one that I will never forget. At the age of 11, I was there with Leousaki and my mother and brother George. The two girls were only a few years older than me and guess who became their interpreter. This was a job I had enjoyed so much as both families were very close. I had the greatest respect for Leousaki because he was a wonderful man. I enjoyed his witty comments and, even though we were a generation apart, we were great mates. My wife and I lived overseas for many years and I worked as a flight engineer with various airlines. On my visits to Sydney, brother George would take me to visit him to learn the latest gossip and play some tavli. Leousaki always had a grin on his face and had a great sense of humor. He had an immence delight in calling me “O Aeroporrrthos”. This word is not in the Greek Lexicon, but you should be able to work it out. Hhmmmm.

No.1 Darlinghurst Road, Kings Cross still exists today in the form of an ice-cream parlour. Opposite is the El Alamein Fountain. Whatever happened to the box of envelopes that Leousaki had given me 67 years ago? When I departed Sydney in 1964 to work overseas, the chocolate box with the envelopes was put into a large container with other mementos and put into storage. I worked in London for two years, the Middle East for six years, Singapore for one year and Hong Kong for twenty years, before returning to Australia in 1993. Over the decades, the container and indeed the contents had slowly faded from my memory. Just over a year ago, I needed to search for some old documents and decided to look into a large cardboard box. Inside were the Malanos envelopes – I had been the unwitting custodian of these treasures for something like 67 years! Among the many envelopes (but unfortunately no pages of correspondence) were two post cards from Kythera, one each from Mary and Eleni, dated 1945 and addressed to their father Manoli at No. 1 Darlinghurst Road, Kings Cross, Sydney.

These have now been returned with great pleasure to the children of these remarkable ladies, Mary Aroney and Eleni Cassimatis. It was quite an emotional moment with a tear in my eye as it brought back a flood of memories and good times during my early days with the Malanos family.