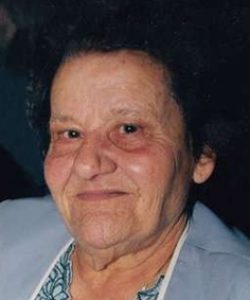 Deep appreciation to the staff of Ashburn House, Gladesville for their tender and loving care of Evangelia over many years.

Evangelia will be remembered for her faith and for her love of family, gardening and celebrations. She was a woman of humour, affection and quiet wisdom.

The relatives and friends of Evangelia are invited to attend her funeral service to be held at St George Greek Orthodox Church, 90 Newcastle St, Rose Bay, on Friday 25 October 2013, at 11 am. On conclusion of service, the cortege will proceed to Rookwood Independent Cemetery Rookwood.

on the Greek island of Kythera

She was the third child of a family of seven:

Her life on the island was hard and with her family, they worked various plots of land to make ends meet. Her father, was a long-standing the mayor of Karava, a picturesque village known for its local springs and views, as its farmlands are terraced. Evangelia’s education only lasted until 5th class, having to work the fields with her brothers and sisters. One time she fell from a donkey and with her foot stuck in the stirrups, was dragged for some distance before being freed. During the war, when Evangelia was 15 years old, tragedy struck when her mother died in childbirth. The war years were devastating for Greece. The occupying forces took all the produce for their war effort and left the locals to starve. Many people died from lack of food and it always amazed Evangelia when she first came to Australia and worked in a café how the customers left food on their plates! By the end of the war, with the island devastated, many Kytherians left for lands of opportunity. (extract from her story as told by her son, Eric Poulos, published in the Kythera-family.net)

Evangelia migrated to Australia in 1949.

Con and Evangelia were blessed with five children

Read her story as told by her son Eric Poulos