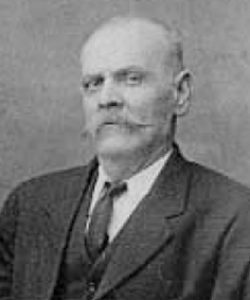 Born in Castellorizo, Greece in 1870

Migrated to Australia just prior to the first World War.

Evangelos and Maria were blessed

A resident of 25 years’ standing in Hay Street and well-known identity in the person of Mr. Evangelos Hatsatouris died in the Hastings District Hospital on Saturday night (18/09/1948).

The late Mr. Hatsatouris was born in Greece 78 years ago, and came to Australia just prior to the first World War. He was a sea captain, and spent most of his life at sea before coming to this country. He was a son of the late Mr. and Mrs. Peter Hatsatouris, and the last surviving member of his family.

In Greece, he was married to Miss Maria Georgus, and a family of five children were born in that country.

The family came to Australia after the father had settled here.

Evangelos left Castellorizo after the Italo-Turkish War to work for the Suez Canal Authority as a pilot. In 1911 he decided to come to Australia where he worked at the smelters. When the Great War began, the island, then under French occupation, was being shelled from the Turkish coast. His wife Maria decided it was time to start removing her children from Castellorizo, beginning with the eldest son, Peter, in 1917. In 1919 the family was reunited and they rented a house in Port Pirie. A strike was called at the smelters, after which they did not re-open. This precipitated a mass migration from the region. All the Greeks left. There were 800 Greeks working there at the time… Some went to Adelaide,Perth, Melbourne, Darwin and Sydney. The year was 1921.

With the traditional ceremony of changing the bride’s and bridegroom’s wreaths of orange blossom tied by a satin ribbon, and also the changing of their wedding rings, the marriage of Miss Helen Hatsatouris with Mr. Fhilllp K. Lucas took place on Sunday afternoon last at the Greek Cathedral of St. Sophia, Dowllng Street, Sydney. The bride is the elder daughter of Mr. and Mrs. E. Hatsatouris, of Port Macquarle and formerly of Castellorlzo, Greece, and the bridegroom, whose home is in Melbourne, is the fourth son of Mr. and Mrs. K. Lucas, of Castellorizo. [The Wingham Chronicle and Manning River Observer (NSW : 1898 – 1954) | Tue 19 Jul 1938 | Page 2 | Personal]

Daughter Irene died in Sydney about ten years ago.

MISS R. HATSATOURIS. The death occurred in Sydney on Saturday last of Miss Rene Hatsatouris, aged 28 years. The deceased young lady was the second daughter of Mr. and Mrs. E. Hatsatouris, of Port Macauarie. and was a native of Greece. With her parents she came to Australia when about seven years of age. The family came to resideat Port Macquarie just over fifteen years ago. Here the deceased as sisted her brothers and sister in conducting their Monterey Cafe, and was well and favourably known to local residents and the many visitors to Port Macquarie. For the past twelve months Miss Hatsatouris had been living in Sydney. Never of a really robust constitution, she had been under medical attention, but passed away as stated. The family will have the sympathy of all in their bereavement, the first to occur. [The Port Macquarie News and Hastings River Advocate (NSW : 1882 – 1950) | Sat 17 Jun 1939 | Page 4 |OBITUARY]

He applied for naturalisation on the 13th March 1929 after being in Australia for 12 years.

The family conducted the White Rose cafe (now the Monterey) in Horton Street for many years, (1926 White Rose Cafe Horton Street Hatsaturis & Sons as listed in The Shops of Port Macquarie) and established the Empire Theatre at the rear of that cafe, branching out later to the Palatial Ritz Theatre, and now a successful circuit of theatres in other centres.

MONTEREY CAFE. Messrs. Ashe and Gilbert, Architects of Grafton, are responsible for the beautiful design of the building recently erected for Messrs. E. Hatsatouris & Sons, and Mr. Ashley Dunn, of Taree, was responsible for its construction. A modern two-storey building, the foundation of which is of reinforced concrete. The ground floor comprises a spacious shop, the walls being treated with texture work, and are finished in two-colour cream, which is very pleasing: to the eye. The ceiling is of a beautiful decorating plaster. There is also a modern kitchen and ladies’ toilet room.The first floor has a large lounge room, bed rooms and roof garden. The facade of the building has been designed in a modernistic style, and has been treated in stucco work, finished in two-colour green and cream. The interior fittings and shop front were installed by Messrs. Frank O’Brien Ltd., of Sydney, and are most elaborate and beautiful. The back bar is constructed of monel metal, green carrara, with metalite and silver mirrors in futuristic design. The wood work is ducoed green and black, and a pleasing feature are the cubic les which are also green and black, and monel metal. The electrical installion was carried out by Mr. A. O. Walker, electrical contractor, pf Port Macquarie. The electrical fittings are very beautiful, the light being supplied from the recently installed 20-h.p. Lister engine supplied by Danger Gedye Ltd., of Sydney. The Port Macquarie News and Hastings River Advocate (NSW : 1882 – 1950) | Sat 21 Dec 1935 | Page 1 | E. HATSATOURIS & SONS.

‘The Ritz,’ the new palatial Port Macquarie theatre, erected to the order of Messrs. E. Hatsatouris & Sons, was officially opened on Wednesday evening by Aid. E. A. Miwle. Mayor of Port Macquarie. There was a large attendance at the opening night, people from all parts of the district being present It was unfortunate that some who had booked seats for the original open ing night, Monday, 20th December, had to cancel their bookings owing to other arrangements. Nevertheless the ceremony was a red-letter day for Port Macquarie, and the program me was thoroughly enjoyed. The owners of ‘The Ritz’ are to be greatly complimented upon the erection of such a large and up-to date theatre, which is a mile-stone in the advancement of the town, and a definitely progressive forward movement. The building is a symbol of faith in the town and its future, and a worthy manner of expressing appreciation of support accorded Messrs. Hatsatouris & Sons since they came to Port Macquarie. It is putting back into the town something receved in it, and helping in its progress, which has been most marked during recent years. We feel sure all will wish them every success in their venture, and due reward for their initiative. Just after 8 o’clock the Mayor, Aid. E. A. Mowle, and Messrs. P. Hatsatouris, Kenworthy (architect) and McAdam (foreman of the work) appeared on the stage, and were well received by the large audience. The Mayor congratulated the owners of the new theatre on their energy and foresight in providing such a fine theatre for its patrons and the town of Port Macquarie. It was, he believed, 20 years ahead of its time. The new structure was a credit to all concerned. Through unforeseen circumstances the theatre was not yet completed, and disappointments had been met, to be overcome by the initiative aad energy of Messrs. Peter and George Hatsatouris, whose word was their bond. The Mayor said he was a great believer in progress, and the construction of this building was progress. Before declaring the new theatre open he called on Messrs. Kenworthy and McAdam to say a few words. Mr. Kenworthy first expressed regret that the theatre was not really finished, through no fault of his, but owing to boat delays, which caused idle time to the men on the work. He also regretted exceedingly it had not been possible to properly light the new building, owing to the electric light contractor being unable to supply the necessary current. This was a very regrettable state of affairs in a delightful place like Port Macquarie, and the residents of the town should make every effort to improve such conditions.Mr. McAdam said he was not an orator, but complimented the owners on this step in progress, and thanked one and all for the help at all times, and wished the proprietors every success with the new theatre. The Mayor had much pleasure in declaring ‘The Ritz Theatre’ officially open, amidst applause. The proceedings were punctuated with rounds of applause as points were emphasised. A good programme was then put on the screen, which was much appreciated by all. The projection was good, and the tone all that could be desired, made possible by the introduction of up-to-date and modern talking and sound equipment The main ‘features were ‘Wings of the Morning,’ a beautiful picture in natural colours, and ‘O-Kay for. Sound.’ The building is very nice, large, and airy, and beautifully appointed. Whilst failing to have a description of ‘The Ritz,’ we recommend all to make a call and see for themselves what the management have done. A personal inspection will give a much more adequate outline and more satisfaction than any write up. [The Port Macquarie News and Hastings River Advocate (NSW : 1882 – 1950) | Sat 25 Dec 1937 | Page 4 | “THE PALATIAL RITZ.”

The deceased gentleman suffered ill health for the past 41/2 years, and spent the last five months of his life as a patient in the H. D. Hospital.

The funeral took place on Monday afternoon, when a service was held at the Church of St. Thomas prior to the cortege moving to the Port Macquarie cemetery, where the remains were interred in the Church of England portion.

Rev. Nicholas, of the Greek Orthodox Church and Archdeacon T. M. P. Gerry, of Port Macquarie, conducted services at the church and graveside. Mr. H. Walker was the undertaker. 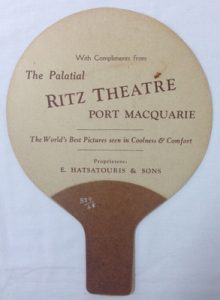