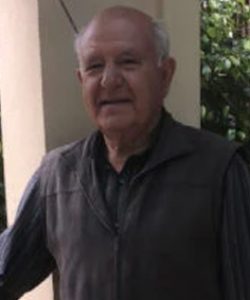 and they were blessed with three children

a daughter in law Ekaterini, a son in law Paul

Fotios sadly passed away in Melbourne,

Fotios was a well-known and respected member of the community.

He was part of several Greek organisations,

serving for years as a Board member of the Panarcadians,

O Kolokotronis. Mr Karamitos was also a member of

where he made many friends and was held in high esteem.

He migrated to Australia in 1955, at the age of 15 and by 1962 was managing the Continental Hotel, situated at the corner of Lonsdale and Russell Street, in the heart of the Greek ‘paroikia’, where he also provided accomodation for new Greek migrants.

By the late 1960s, he took up a role as a managing partner of a real estate business before partnering up with his brother in law Chris Togias to form a successful building company which lasted for 30 years.

He was a very patriotic man who loved the Greek Community and was very proud of the next generation steering the community in the right direction. He admired the work that Bill Papastergiadis and his Board have done over the last 10 years, providing roots for the next generations to keep our Greek ethnicity alive in Australia.

However his pride and joy of course were his six grandkids.

He is survived by his wife Sophia and his three children Jim, Michael and Peggy as well as his daughter in law Ekaterini and his son in law Paul.

May he Rest In Peace and May God bless his soul.