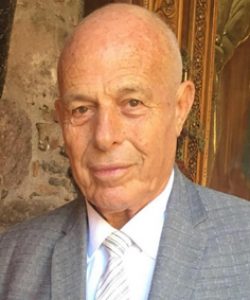 The much-loved supporter and former administrator of the Pan-Hellenic (now  Sydney Olympic) football team and owner of a successful hardware business in Marickville, Sydney. George Kefalas passed away on Friday, 15 May.

Mr Kefalas who came from Asomatos, Lesvos, came to Australia in 1960. He found work in a Greek cafe in the Redfern area of Sydney. In 1961 he married Stavroula, who bore him two children, Mario and Efstratios. Mr Kefalas went on to become a salesman for the Newtown branch of Walton Stores and became its manager within six months of joining the company. He remained with Walton Stores for nine years. He then decided to launch his own business, Kefalas Hardware Store, in a building next to Walton’s. The business was to be part of the life of his family for the next 30 years. In 1971, he decided to move to Marickville which was the centre of the Greek community in Sydney. The move proved to be a big success, with a growing reputation and clientele, he was even fulfilling orders beyond the borders of  New South Wales. A Marrickville resident was to say of the Kefalas business: “Before Bunnings, there was Kefalas Hardware.”  Mr Kefalas moved the business to Illawarra Road in 1982, and with his family he continued to run the business until it finally closed in 1996. Mr Kefalas was passionate follower of football and of the Pan-Hellenic team in particular. Such was his commitment that he was to serve as its president during the 1970s.