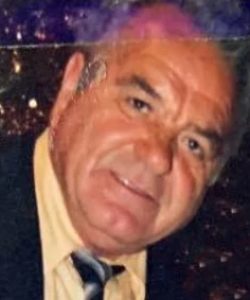 in the tiny village of Agia Triada in Greece.

Upon completing his military service

he migrated to Germany, where he worked

as a kitchen hand on boats and then for a car company.

His love of travel lured him to tropical Townsville.

He decided to migrate permanently to Australia

with his second wife, Aristea.

Article by: Rhiannon Down

The heartbroken family of St Basil’s resident Ilias Takis have paid tribute to a “wonderful father and great man” after he died from COVID-19.

The grandfather, who was born in Greece and immigrated to Australia becoming a citizen in 1985, succumbed to the virus on Friday after he tested positive four days earlier.

Two of his daughters Evagelia and Eleni, have shared fond memories of a loving family man with a fighting spirit.

“My dad was a little fighter, he’s pulled through a lot of health issues and we thought this isn’t going to stop him,” Evagelia said.

“He stood up for what he thought was right, he loved his children and he was a family man.”

Eleni Takis said her father, who was in the army in Greece before working as a gardener and kitchen hand, also had a fun side.

“If he had a birthday celebration he made sure everyone had a shot of ouzo,” she said.

The sisters said the family were heartbroken that he will not be there for Evagelia’s wedding next year.

“He was an older gentleman he didn’t have much left but if he had a few more months he would have seen my sister’s wedding,” Eleni said.

Mr Takis is survived by seven children and his wife Aristea.