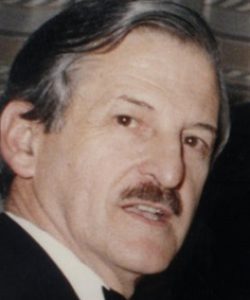 The Honourable James (Jim) Samios AM, MBE passed away peacefully on Tuesday, 19 July 2011 after a long illness. Jim was aged 77 years.

Jim forged an extraordinary career. He was selflessly devoted to public service and made an immense contribution to the community, particularly in New South Wales. His sister Helen Margetis and brother Nicholas Samios, together with Bretos and Theodora, his nephew and niece, remember Jim with much love and admiration for the good work he achieved as legal advisor to His Eminence Archbishop Stylianos for many years and as a politician in the area of Ethnic Affairs and the Arts. His parents, Miltiades and Constantina were an inspiration to him and a source of strength and character.  May his soul rest in peace. (source: kythera-family.net)

James SAMIOS AM MBE passed away in Brisbane, Queensland. The obituary was featured in Courier Mail on July 22, 2011.

Former New South Wales Upper House MP Jim Samios has died at the age of 77. The New South Wales Liberal Party President, Natasha Maclaren-Jones, said Mr Samios, who died on Tuesday night, was a much loved member of the party. “Jim was a great servant of the Liberal Party and a mentor to many. He worked tirelessly in the community and his loss will be deeply felt,” she said. The son of Greek migrants, Mr Samios grew up in Brisbane. Before entering politics, he worked as a solicitor in the Commonwealth Attorney General’s Department in Brisbane, Canberra and Sydney, and became a pilot officer in the RAAF General Reserve. Mr Samios served as a Member of the New South Wales Legislative Council from 1984 to 2003, and was a Parliamentary Secretary in the Greiner and Fahey Governments and a Shadow Minister in Opposition. Through his career he was a strong supporter of cultural diversity and the arts. He is survived by his wife Rosemary, his son Milton, daughter-in-law Jacci and grandchildren, Jamie and Sofia Rose. [The Sydney Morning Herald | July 20, 2011 — 10.50pm]

Short biography [as published in wikipedia]

Born in Brisbane, Queensland, he was educated at the Anglican Church Grammar School. Samios became a lawyer in Brisbane and a member of the Commonwealth Attorney General’s Department, which took him to Canberra and then Sydney. He married Rosemary Nicolson, with whom he had one son. Samios served in the RAAF 1953–1954 and was an officer in the General Reserve in 1963. He was also a director of St Basil’s Homes and a founding director of the Museum of Contemporary Art.

A member of the Liberal Party, Samios was elected to the New South Wales Legislative Council in 1984. He was a parliamentary secretary from 1988 until 1995 (when the Liberal-National Coalition lost power to the Labor Party). From 1995 until 2003, he was deputy leader of the Liberal Party in the Council. He retired before the 2003 state election.