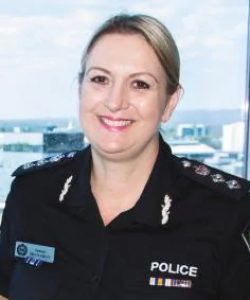 Senior police officer Joanne Shanahan, was killed in a three-car crash at Urrbrae on Anzac Day. Police formed a guard of honour along the streets of Adelaide’s inner south to pay tribute to the mother of two. Her cortege set off from the family’s home and crossed the intersection of Cross and Unley roads. It then proceeded through several suburbs to Berry’s Funeral Home at Norwood in Adelaide’s east, where Amazing Grace was sung as her coffin was carried in. A poem was read by Chief Superintendent Shanahan’s daughter Eleni, before her son, Nick, remembered her as someone who always took an interest in the lives of others. “She would always make sure there was dinner for 10, just in case we had a few guests call in, as we almost always did,” he said in a eulogy. (www.abc.net.au)

Adored mother of Nicholas and Eleni,

You will always be remembered

Joanne’s family, friends and colleagues are invited to live-stream her Funeral Service on FRIDAY, May 8, 2020 from 10:45am for an 11am commencement by visiting berryfunerals.com.au. There is an open invitation to witness the cortege travel up Greenhill Road from Unley Road, and along Fullarton Road, Kensington Road, Osmond Terrace and Magill Road to the Chapel of Berry’s Funeral Home. Please be mindful to comply with current social distancing and gathering regulations during this time. Following the Service, the stream will continue to be available on-demand.

in law enforcement at the age of 17.

She joined the force in 1981 and graduated

from the police cadet course in 1983.

In 1983 she met her husband, Peter Shanahan

through the SA Police Force and they married five years later.

and child-abuse cases and was appointed officer-in-charge of a specialised unit in 1999.

In 2002 she was promoted to the rank of inspector

and worked as a manager and leader in several units, focusing on domestic violence.

Joanne was just the third woman in SA Police history to be appointed Chief Superintendent.

Joanne Shanahan was farewelled by her family and friends on Friday 8 May at 11am .

Read more, Joanne Shanahan, a tribute to a remarkable woman that left us too soon