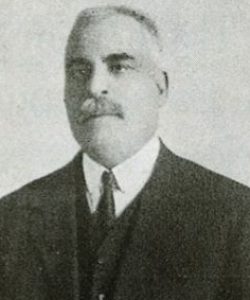 John Comino
was born
on the Ionian island of Kythera (Cerigo), Greece, in 1858?
to
Demetrio Comino, farmer, and his wife Agapy, née Menego.
John migrated to Australia in 1884.
His brother Athanasius aged 53, he died of a strangulated hernia on 30 December 1897 at Darlinghurst,
leaving an estate valued for probate at £5217 to John and to nephews and nieces.
Inheriting from Athanassio the title, ‘Oyster King’,
John applied a formidable business aptitude to orderly expansion.
In 1898 he was naturalized.
With several others he was responsible for raising funds
to erect the first Greek Orthodox Church in Australia,
Holy Trinity Church, Surry Hills,
where on 6 September 1901 he married Anna Phocas;
her father Seraphim Phocas officiated.
John and Anna had four sons:
John Demetrius, Athanasios, Nikolaos and Constantine,
of whom John Demetrius was the most notable;
after graduating in engineering in London in 1922 he founded the firm
of Dexion-Comino International,
manufacturers of structural steel components;
and as Sir John Comino he was honoured
by the British and Greek governments for his contributions to science and industry.
John died of pneumonic influenza (Spanish flu)
at Belmore Road, Randwick, on 21 June 1919,
leaving to his wife and four sons an estate sworn for probate at £31,872.
Anna returned to her birthplace, Rhodes,
and later settled in London, where she died in 1970 at the age of 87.
————————————————
“THE OYSTER KING”
Death of John Comino [The Sun, Saturday, 21 June 1919, page 7]

Mr. John Comino, the well-known oyster merchant (known as “The Oyster King”), died to-day from pneumonic influenza. He was a native of the Ionian Isles, was in his 61st year, and had been in New South Wales for about 40 years. He had done much to develop the fisheries industry In this State, and, at one period, was the owner of many oyster beds. Mr. Comino who left a widow and four young sons, married the daughter of the Greek priest (Father Fokas). He was a brother of the late Mr. Athanassio Comino, another well-known Sydney oyster merchant, and amongst his relatives are Mr. Nicholas Comino, of Sydney, Mr. Demetrius Comino, of’Athens (Greece), and Messrs. Athanassio Lazarus and-J, Lazarus, of Sydney.Mr. Comino, who was a man of considerable wealth, lived at Coogee. He had been suffering from influenza a few days only.Tho funeral will take place on Monday afternoon at 3 o’clock, and will move from the Greek Church, Surry Hills, for the Waverley Cemetery.