Prominent Greek Citizen Dies
The funeral of Mr. Stavros Cratsis, a leading member of the Greek community of Adelaide, who died yesterday, will pass through city streets today before proceeding to the Greek Orthodox Church and West Terrace Cemetery. Mr. Cratsis who was 54, lived at Parker street, Mile End. and was proprietor of the Star grocery store, Hindley street. He was treasurer of the Greek community, president of the Castellorizian Brotherhood of SA and a foundation member of the Greek Orthodox Church in Adelaide. He has left a widow and three sisters — Mesdames Christina Topalsava and Katholika Anastasas, of Adelaide, and Mrs. Despina Paltoglou, of Melbourne.
The funeral, which will leave Thebarton at 120 pm, win proceed to Lockleys, where the late Mr. Cratsis endowed homes, and will return to the city, passing along West terrace, Hindley street. King William street and Franklin street.

ADELAIDE, Tues — Thirty mourning coaches will form part of a Greek funeral procession through Adelaide on Thursday. Special permission was given for the funeral procession of Mr. Stavros Cratsis, 54-year-old proprietor of a grocery store in Hindley st, Adelaide and treasurer of the Greek community

Greek Community At Funeral Service
One of the longest funeral processions seen in Adelaide followed the cortege of the late Mr. Stavros Cratsis, 54, manufacturer, of Parker street. Mile End, yesterday. Mr. Cratsis, who was an ex-serviceman from the first World War, came to South Australia in 1928. He had a factory in Fenn place, city, and was proprietor of the Star grocery store Hindley street.The funeral services, which were attended by the entire Greek community, were conducted by the head of the Greek Orthodox Church in this State (Rev. C. Tatsoyannis) and the Rev. H. Evaagelinidis.

Procession by Candlelight
Headed by robed clergy, a crucifix, and religious banners, 2,000 people in a candlelight procession through city streets will usher in Easter in the traditional manner of the Eastern Church soon after midnight tonight. Starting in Franklin street, the procession will move by Gratlon street to the churchyard of the Greek Orthodox Church, and through the yard to enter the church. Following Good Friday services yesterday, the Easter celebrations began tonight with a pre-service at 1020 p.m. After this all church lights, except the altar light, were extinguished and the congregation assembled in darkness outside. Every candle will be lit from the one lighted taper carried by the priest. Rev. C. Patsoyannis before the procession moves off at 12.20 a.m. to. carry the candles into the darkened church. Mr. Patsoyannis said today he expected 2,000 men, women, and children of the Greek, Russian, Syrian, and Bulgarian communities of Adelaide would attend the services. The church was built In 1937, largely due to the efforts of Mr. Stavros Cratsis, whose recent death would be remembered sorrowfully tonight. Mr. Patsoyannis explained the Greek Orthodox Church fixed Easter as the Sunday following the full moon of spring in the Northern Hemisphere. This was a different basis ofcalculation from that used by the western churches. Consequently, although they sometimes coincided, the churches usually celebrated Easter at different dates. 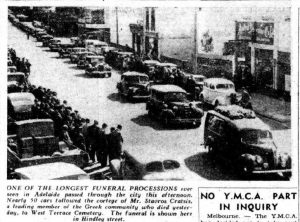 ONE OF THE..LONGEST FUNERAL PROCESSIONS ever seen in’ Adelaide passed through the city this afternoon. Nearly 50 cars followed the cortege of Mr. Stavros Cratsis, a leading member of the Greek community who died yesterday, to West Terrace Cemetery. The funeral is shown here_ .. in Hindley street.
News | Wed 31 Mar 1948  | Page 8