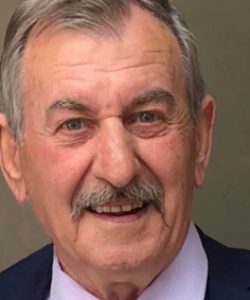 Thanasis Spanos passed away on 31 July, surrounded by families and friends.

The news spread throughout the Greek community of Melbourne where Mr Spanos was well known for writing history with his businesses. A fixture in the Greek Australian hospitality industry, he was known for Medallion on Lonsdale Street, Thanasis tavern at Hughesdale and Vanilla at Oakleigh.

Born in Imathia, Central Macedonia, he came to Australia as a migrant and was successful in hospitality. Known for his humour and weakness for tsipouro, he lived a life to the fullest. In recent years he had taken a break from work due to his health problems.

This afternoon our beautiful Thanasi was surrounded by his family and passed peacefully and pain free. His larger than life personality and powerful spirit has given us strength and love for eternity. His passion for life was infectious and his generosity was endless… we are devastated for this great loss but will be forever grateful and proud for the great life he lived and loved so much.

His family thanks you all for your love and support. Loving wife Helen, his 4 children and their partners, Stamatia-Antoni, Vicki-Christo, Haroula-George, Dennis-Chantal, and his gorgeous grandkids, Regina, Eleni, Theodore, Thanasi, Angelique, Athina, Eleni and Rosina.

There are some people who absolutely blaze a trail.

Thanasi did this in spades. He was one of the pioneers of Greek hospitality businesses in Melbourne, including in Lonsdale Street (the old Greek precinct) and then later right here, with venues including Thanasis Tavern in Hughesdale and of course the most famous – Vanilla

Every person he saw would be like greeting a long lost friend or family member. His smile would light up the whole street and he would never let you go past without grabbing you, sitting you down, giving you a drink and having a conversation.

He was somebody who would help anybody who asked and even more who didn’t but needed help.

His ability to connect with everybody was like nothing I have ever seen. The only thing bigger than his smile and his passion was his heart.

And that was so clear whenever I would see him with his beautiful family, his wife Eleni and all of his children, their partners and his grandchildren.

What an incredible family the Spanos family is. They are at the heart of our community. Thanasi’s family is as special as he was. To all of Thanasi’s family, to his friends and to all those who loved him, my deepest condolences.

This will be deeply felt by the Oakleigh community. We will stand by you always.

People who knew Thanasis knew he had a warm heart, complimented brightly by his warm smile. Passing aged 74, Spanos will be deeply missed by the Greek Community in Melbourne, where he began his hospitality legacy.

When Thanasi came to Australia in 1971, his first port of call was Lonsdale Street, where he later ran Medallion Cafe for 20 years. Thanasis’ greatest success, however, came from operating ‘Vanilla’, which has grown to be one of the largest businesses in Oakleigh. An avid football fan as well, Thanasi was a supporter, life-member, sponsor and friend of South Melbourne FC for almost five decades.

Steve Dimopoulos, MP for Oakleigh, said Thanasis’ ability to connect with everybody was like “nothing I have ever seen”.