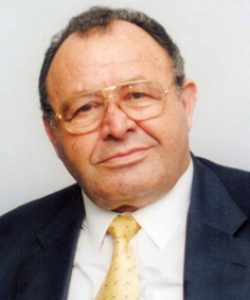 Theo Skalkos, a self-made entrepreneur, whose Media publishing company had been in operation since 1966, after Skalkos had worked in stints in sugar-cane cutting, various factories, a driving school, a wedding car rental company and, finally, a printery. Skalkos’ good relationship with Rupert Murdoch, who purchased the 0/10 network in 1979, ensured two Greek variety programmes were aired in Sydney. Let’s go Greek began broadcasting in 1979, produced by Theo Skalkos.

in Skala Laconia in southern Greece, in 1932.

He migrated in Australia in the early 1950s.

after suffering from a stroke.

He was very passionate about his Greek background and made a significant contribution to the development of the Greek-speaking press in Australia. He had also brought Greek performers to Australia, owned a radio station, had television shows, a printing press, and a travel agency.

Theodore was the Managing Director of FL Press which published The Greek Herald, The Spanish Herald, Novosti and multiple other foreign newspapers.

He was a beloved Father and Grandfather.

A service to celebrate the Life of Theo will be held at Le Montage,

38 Frazer Street, Lilyfield in the Gallery Room on Wednesday,

Following the service, a wake will take place in the Sarah Grand Ball Room.